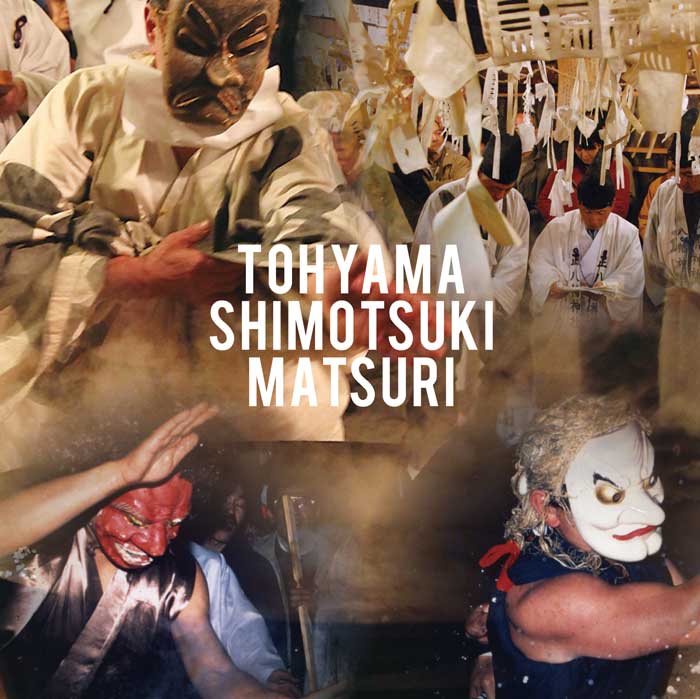 THE WORLD OF THOYAMA SHIMOTSUKI MATSURI

WHAT IS TOHYAMA SHIMOTSUKI MATSURI? 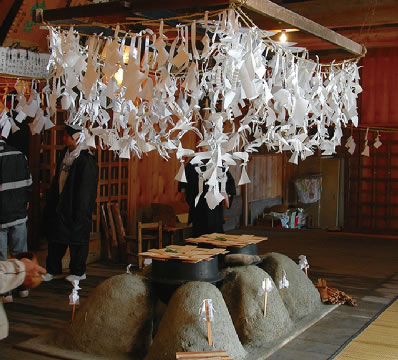 With the coming of every winter, you can hear the reverberating sound of Japanese drums and flutes in Tohyama valley. Tohyama Shimotsuki Matsuri has handed a tradition down by generation after generation for a great many years supported by deep religious villagers and their earnest wishes. This Matsuri shows the uniqueness of a mixture of Buddhism and Shintoism. The action of Yudate (See the following item “Yudate”) with chanting Kagura (See the following item “Kagura”), which is repeated over and over during the Matsuri, is also another uniqueness of the Matsuri.

The Tohyama Shimotsuki Matsuri was designated as an important intangible folk cultural property in Japan in 1979.

THE SEASON OF THOYAMA SHIMOTSUKI MATSURI 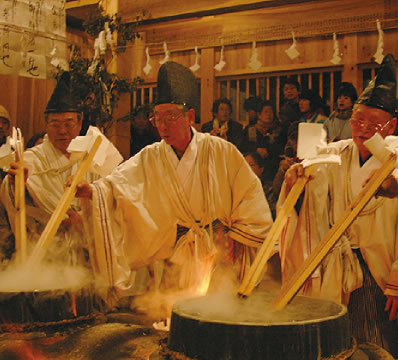 As the season is turning to winter and hours of sunlight becomes shorter and shorter, all nature in Tohyama valley gradually changed – the leaves in the mountains fall from the trees, temperature drops down day by day, the tops of the mountains are covered with white snow and snow falls in the village. Then, the village greets the freezing cold winter. In such a harsh environment the ancient people thought it was the season of 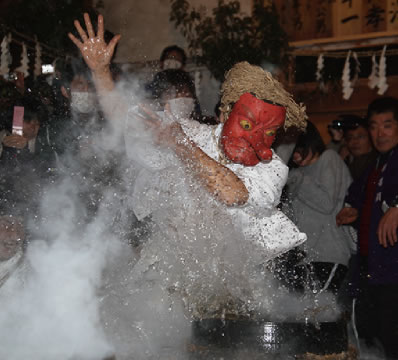 THE NIGHT OF TOHYAMA SHIMOTSUKI MATSURI 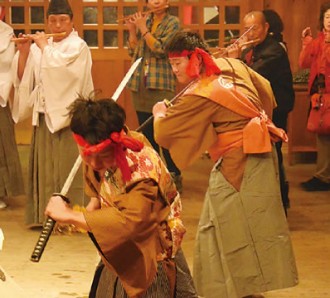 “Time” is very significant for Tohyama Shimotsuki Matsuri; it is usually held long into the night. Throughout the ages, inviting the kami and worshiping them in the night instead of the daytime was a general style of Japanese Matsuri. The people invited the kami before sunset, entertained them throughout the night and sent them off at down. The sunrise right after the Matsuri’s night meant the revival of the energy of the Sun. The shrine priests and the villagers who organized the Matsuri felt themselves reviving by worshiping the new Sun.

THE HISTORY OF THOYAMA SHIMOTSUKI MATSURI

THE ORIGIN OF THOYAMA SHIMOTSUKI MATSURI 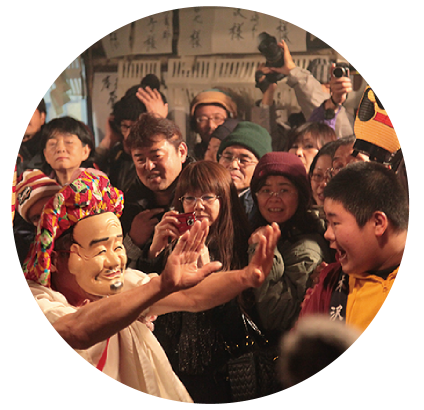 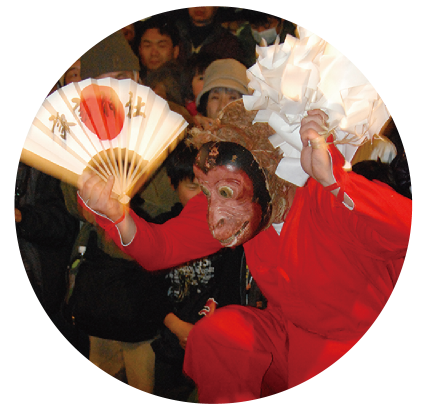 The Tohyama clan was deprived of their control over the land area by the Tokugawa shogunate in 1618 as punishment for an internal squabble over their succession.
The internal dispute was fierce and embroiled the people in the village. As a result, it caused larger peasant revolts.

After the depriving, some epidemics spread and killed many people.
People in the village considered the reason of the epidemics was a curse of the Tohyama clan who were killed by the peasant revolts. Since then, in accordance to ancient folklore, they performed a ritual in response to the Tohyama clan’s spirits in the Matsuri adding to the traditional rituals they had held before.

It can be said that a distinguishing characteristic of the Tohyama Shimotsuki Matsuri is the appearance of not only the Hachiman faith (a religious belief in Hachiman kami) but also the Goryo faith (a folk religious belief of avenging spirits).

THE DEVELOPMENT AND THE TRANSFORMATION OF TOHYAMA SHIMOTSUKI MATSURI 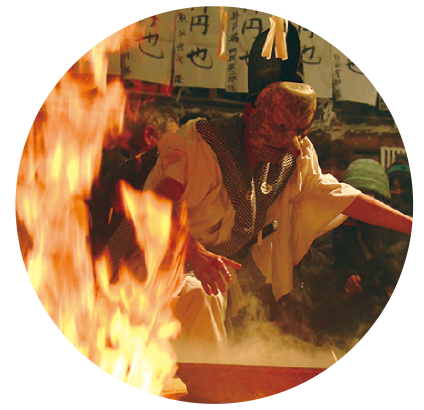 At the beginning, Tohyama Shimotsuki Matsuri was held in only *Hachiman-jinja shrines where Tohyama Hassha Gami are enshrined. After the mid-Edo period, other shrines started doing the Tohyama Shimotsuki Matsuri as well as the Hachiman-jinja shrines. As the Matsuri spread out, various kinds of masks of not only the Tohyama clan but also another kami were dedicated to these shrines from the villagers.

The villagers made a petition to the kami and desired to fulfill their wish in a society unstabled by famines and epidemics and battled for the common mountain of village and so on. They danced wearing the dedicated masks for their wish or for hoping their wish comes true. 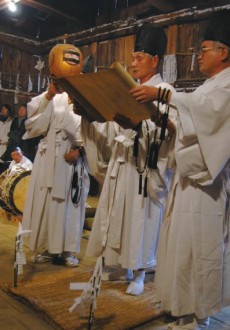 At first, in the Tohyama Shimotsuki Matsuri, Harai-Kiyome which is one of the most important rituals in Shinto is performed solemnly. In this ritual, various kinds of Harae-kotoba and Norito are chanted.
Harae-kotoba are words to cleanse sin and impurity. Norito are words to glorify and pray for kami. In the Tohyama Shimotsuki Matsuri, various combinations of Harae-kotoba and Norito, which are different from each shrine, are chanted over and over. 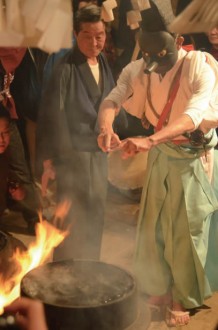 After Harai-Kiyome, Kami-Mukae is conducted to invite kami. This has been a naturally high prestigious Shinto ritual in Japan. In Tohyama Shimotsuki Matsuri, a Shinto priest reads out the lists, called Jinmeicho, of 66 Ichino-miya (Japanese Shinto shrines with the highest shrine rank) and the kami in this ritual. 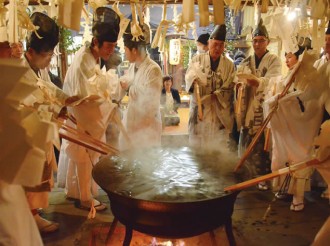 After Kami-Mukae, Yudate, one of the main rituals in Tohyama Shimotsuki Matsuri, is performed. In Yudate, priests boil water from a river in iron pot/pots with fire. The water and fire are treated as “sacred water” and “sacred fire”. In the Matsuri, the priests perform the Yudate with ritual dances over and over around the iron pot/pots. The people dedicate the sacred water to all kami, and also pour the sacred water over themselves to pray for reviving their energy and reconciling themselves.

In addition, the priests and the villagers liken the steam from the boiling water to a bridge to come and go to the heaven for all the kami they invite from the whole of Japan. 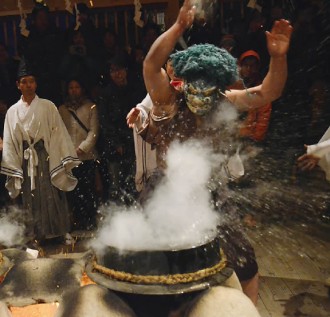 Omote, masks imitated kami and any other spirits, is another distinctive ritual of Tohyama Shimotsuki Matsuri. Today the Omote ritual is the star performance of the Matsuri which many tourists come to see.

The villagers made a petition to the kami to escape disasters like earthquakes, famine, illness and injuries. If their wish came true, they dedicated an Omote to a shrine in return of the favor, and danced wearing them in the Matsuri.

Omote are carefully kept out in shrines. Each shrine has Omote from 15 to 41, and a total Omote existing in Tohyama reaches 286 now. The era or time when these Omote were dedicated are presumed by an inscription on the back side of the Omote or its box, the Omote’s style and oral tradition. Some Omote were dedicated from the end of the Edo period through the Meiji period. Additionally, there is an ancient Omote, which is the oldest in Nagano prefecture. This remarkably old Omote was made presumably between the Kamakura period (1185-1333) and the period of the Northern and Southern Court (1336-92). The mask actually has not appeared in the Matsuri. 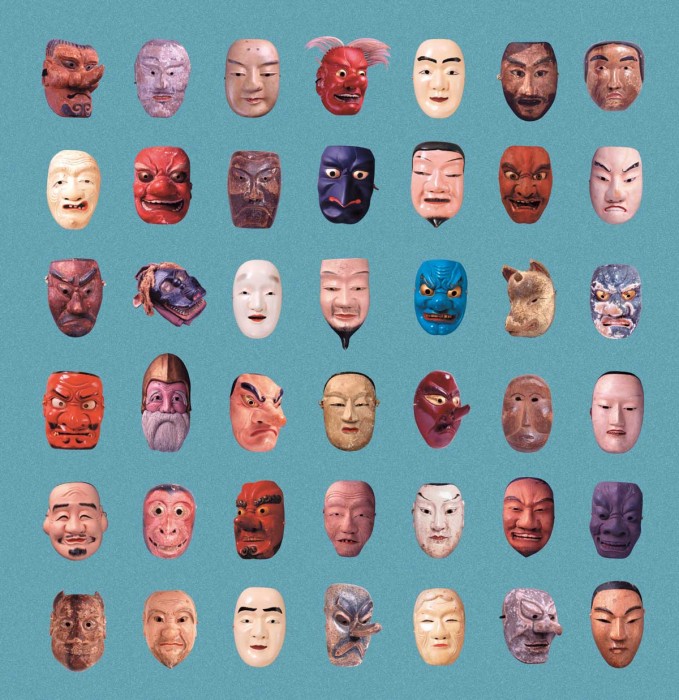 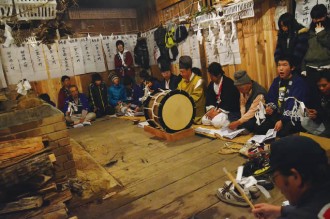 Kami which are invited at the beginning of the Matsuri must surely be seen off at the end. In the end of the Matsuri, Kami-Kaeshi is performed in order to see the kami off. Every shrine sends the kami off by various combinations of Yudate, Kagura and Mai (See the following items “Kagura” and “Mai”). 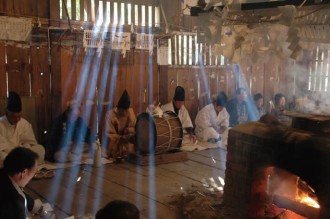 Kagura and Mai rituals are repeated over and over during the Matsuri. In general, Kagura is a form of songs and dance dedicated to the kami in Shinto in Japan. However, in the case of Tohyama Shimotsuki Matsuri, Kagura expresses only the song part, not including the dance. Priests sit on a straw mat around iron pot/pots, and chant Kagura with ringing bells along with a Japanese drum.

Mai is a Japanese traditional dance in Shinto dedicated to the kami. There are various kinds of Mai performed in the Tohyama Shimotsuki Matsuri. In Mai ritual, routine action is performed constantly and repeatedly with the sound of Japanese flute and drum in short phrase. The routine is based on slowly rotating movement with a Japanese folding fan, a Japanese sword or bells. Each tool, movement, step and number of times Mai are performed have important meanings. 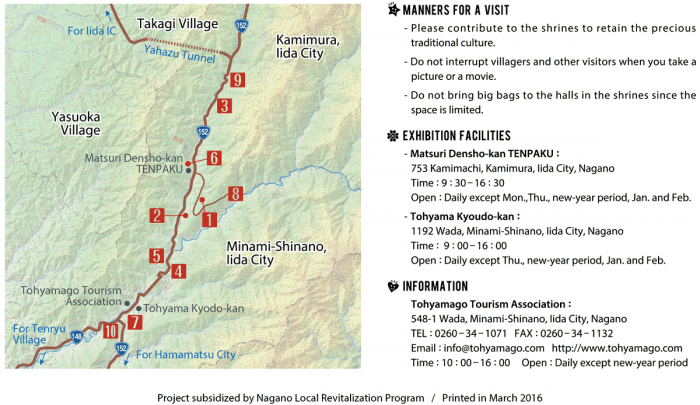